MIXTAPES, a collaborative concert series produced by Buffalo Music Club and Music Is Art, seeks to bring artists together on stage for exciting one-time-only experiences. 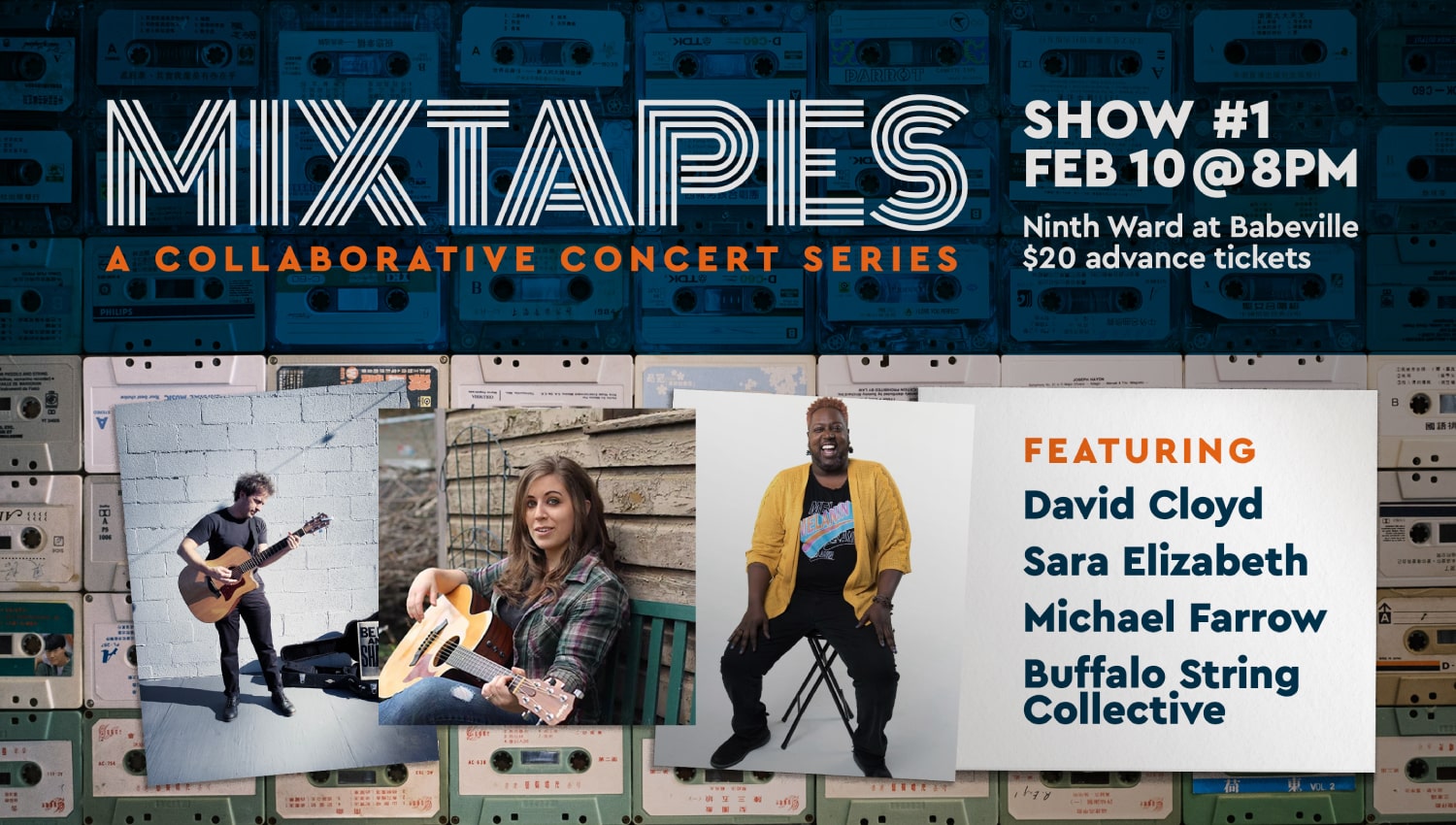 Join singer-songwriters David Cloyd, Sara Elizabeth, and Michael Farrow for an evening at Ninth Ward as they share the stage, performing their original music like you’ve never experienced it before–with a string quartet.

For this series premiere, three songwriters have put together a special collection of old and new songs to perform in a variety of combinations backed by Buffalo String Collective (with arrangements written by Cloyd). The inaugural lineup for BSC includes Sarah Cole and Inga Yanoski on violin, Amy Kelly on viola, and Alex Cousins on cello.

A portion of ticket sales will be donated to Buffalo String Works.

DAVID CLOYD is a solo recording artist with ECR Music Group in NYC, the founder and A&R of Hook & Ladder Records, and the co-founder of Buffalo Music Club.

Following its worldwide release, his debut album Unhand Me, You Fiend! hit #1 on eMusic’s Album Charts. Cloyd followed on the national success of that album with I Could Disappear, a powerful collection of solo performances, and a fresh take on a Paul McCartney classic “Dear Boy” from the 1971 album Ram. He is currently in the studio, finishing up his third album.
David Cloyd on BMC

At the intersection of grit, quirk, and grace, you find SARA ELIZABETH–an indie alternative singer-songwriter with stories to tell, energy to share, and love to give.

As Jeff Miers of the Buffalo News has said, “Bringing an indie-rock mentality to the modern folk-based troubadour school is Sara’s deal, and it’s working . . . she’s become one of the more buzzed-about artists on the local indie-pop scene.”
saraelizabethmusic.com

MICHAEL FARROW (MYQ F) is a Buffalo-based singer-songwriter whose fusion of cathartic soul with American Folk creates a sacred music space that unwinds the tension and isolation of modern life.

SARAH COLE teaches violin at Buffalo String Works while maintaining a large private studio of beginners to advanced musicians. Sarah has three advanced performance degrees from Baldwin Wallace Conservatory, Royal Welsh College of Music and the University of Louisville. She performs around WNY as a freelance violinist.
INGA YANOSKI is a classically-trained violinist in Western New York, where she has been a regular substitute player for the Buffalo Philharmonic, and has participated in several professional recordings with them for the Naxos label. She has also played in the pit at Shea’s for many touring Broadway shows. Inga loves the Buffalo theatre community, appearing in several productions as an onstage musician. Her versatility has allowed her to stretch beyond her classical training, playing folk music with her trio The Bards, being a back-up singer and violinist for 10,000 Maniacs, and appearing onstage with icons like Rod Steward and Stevie Wonder.
AMY KELLY has performed with the Southern Tier Symphony, Buffalo Opera Unlimited, the Western New York Chamber Orchestra, the Buffalo Philharmonic, I Solisti of WNY, and other local groups. She is a teaching artist at Buffalo String Works.
ALEX COUSINS has performed as a soloist with the Buffalo Philharmonic, the Four Centuries Chamber Orchestra, Peabody Conservatory Symphony Orchestras, SUNY Fredonia Orchestras, Southern Tier Symphony, and others. He also served as Principal Cellist of the South Carolina-based Rock Hill Symphony Orchestra and is a member of The Liminal Space Ensemble. She is a teaching artist at Buffalo String Works.